A Jedi is no match for a Bursar

Jack Marriner’s[1]Tesla parked itself silently in his allotted space, outside the Bursary at Fandangle Hall School. As he got out he had that sense that today was going to be no ordinary day.

‘Therefore just like every other day in the Bursary’ he thought wryly, as he walked inside.

As he entered he could hear the baleful cries of the prisoners down below. I hasten to assure you, Dear Reader, that Jack was a compassionate bursar at heart; and he disliked this side of the business. But there was no doubting that school fee payment had improved markedly since he’d instigated the deterrent policy of jailing any long term debtors. This, and other initiatives necessary to bring things back on an even financial keel after the untimely demise of his predecessor[2], had earned him a reputation for running a tight ship.

Indeed, his fame in that respect had spread rather further afield than he realised, as he was about to find out. No sooner had he sat down than Softly Softly, his PA, looked in.

‘He’s most insistent, and – somehow rather persuasive,’ replied Softly Softly.

‘Alright. I’ll be out in a minute.’ But even as he spoke his visitor was pushing his way through the door.

‘Mr Vader, do come in. How can I help?’ said Jack without a trace of disquiet in his voice, as he walked forward to shake the hand of the tall, dark figure framed by the doorway.

‘I am LordVader, actually.’ The handshake was declined. Jack noticed that his visitor’s features were obscured by a rather forbidding black mask, like something out of a film set. And he spoke with a strange, rasping, almost metallic tone.

‘Oh, I’m so sorry. We had no prior knowledge of your coming and…’

‘Spare me the pleasantries. I hear you run a tight ship and so I am here to find some answers.’ He had a way of emphasising certain words that made him come across as slightly menacing, if a little high-handed for a first meeting.

‘We try,’ replied Jack, wondering where this was going and surreptitiously activating the pocket transmitter that silently alerted his Estate Manager, Sam Wisely, that there might be trouble brewing and he should make his way back to the Bursary just in case. Sam was ex Special Forces and a Grand Master in several martial arts.[3]

‘I understand you have discovered the secret of infinite energy in your school.’

‘That would be a slight overstatement Lord Vader. But we are working our way steadily towards turning a profit on our energy consumption, rather than it being the significant cost that it used to be…’

At this point, Dear Reader, I must step in and bring you up to date with developments at Fandangle Hall School; for it is indeed the case that Jack had achieved great things on the energy front. Infinite energy is another thing altogether, but he had embraced wholeheartedly the opportunities offered by UK Government policy on renewable energy systems over the past two years. And even now, in late 2017, he continued to look for ways to capitalise on the opportunities – for they were still aplenty, contrary to perceived media wisdom.

The secret of his success was that he’d realised from the outset that renewables were not just about saving the planet, but they were also a means to make a longer term profit for the school. The trick was to identify which parts of the estate, no matter how small, could be configured to unlock the most favourable subsidy rates for a given technology, rather than thinking about the estate purely in terms of energy needs. He had tested every part of the estate against the full gamut of viable technologies and now had a range of nice little earners, as well as two major district systems. One by one they would turn profitable, such that by 2021 energy usage on the estate would have become profit-making. It was an extraordinary achievement.

‘It’s all very well,’ I hear you say. ‘But when teachers are beating a path to your door demanding you fix this-that-and-the-other by tea-time; and when the Government seems constantly to be moving the goalposts, it’s easy to lose one’s resolve.’ I agree. But of course, he had not done this alone. He had realised at an early stage that his list of important things to do would never be less than a hundred. So he’d invested some time in finding reliable help – within his staff and externally. However, the key thing is that it was hisbrainchild; and surely that, Dear Reader, is the acme of skill – to get the work done[4].

But I digress. We must return to the office, where Lord Vader had just explained all about his ambitions for the Federation Space Fleet – which Jack found straightforward enough. And now Jack was trying in vain to get Vader to understand the UK renewables subsidy system…

‘So your government will give you money for all the renewableenergy you use for the next 20 years?’ asked Vader.

‘Not so. They need to make it attractive, otherwise people would never make the effort to change the status quo. And the rates do remain attractive, in spite of reports to the contrary. Some are amazing. I’m about to install a heat pump that will fetch the school a return on investment of 20% per annum. It’s hard to think of a better way to make money.’

‘There must be a catch.’

‘There isn’t. It’s true that the system can be a bit of a minefield, but I get advice on that when I need it. The Government has already reviewed the subsidies for power generation and set the rates for the next 3 years. They’re reviewing the heat incentives next year, but they’ve already said that they will keep some rates unchanged. And the 20 year guarantee remains in place. So I could install a new solar system next year and still get the subsidy until 2037.’

‘You are planning to renew the Solar System?! Bursars are more powerful than I thought! I musthave some of these subsidies.I need more power to make my DeathStar work.’

‘Do you defy me? Do not underestimate the power of the…’

‘No, no. You don’t understand, it’s just a technicality’, said Jack, who had already decided that in reality this Vader fella was an easier ticket than the Chair of the Finance Committee. ‘You have to be registered and located in the UK.’

At that moment they were interrupted as Sam Wisely entered.

‘No Boss, not that. It’s Mr Vader’s space ship. It was parked by the waste collection area. The council truck has just trashed it. Accidental of course. But I’m afraid it’s a write-off.’

Jack looked at Vader with a winning smile. ‘Looks like you could be here for a while, Lord Vader. I’m sorry. However, we do have a vacancy for a teaching assistant in the Geography Department. You must have travelled a fair bit…?’

[3]Available at most reputable school suppliers – (the transmitter, not the martial arts support to the Bursary). 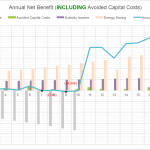