Ali Frankley and the Meaning of Chocolate

In this exclusive interview with Ali Frankley, who has been bursar of Fandangle Hall School since 2020, we learn that as well as doing all the other herculean tasks that form the typical lot of the bursar, she was recently awarded an MBE for making Fandangle Hall the first true zero-carbon school. (see the Autumn edition of BR).

BR. First of all, congratulations on the award. I expect you must be thrilled.

AF. Of course, but I enjoyed the journey and I earnestly believed in what we were trying to achieve at the school, which took a lot of the heartache out of the effort. Anyway, I know it sounds like a cliché, but it was definitely a team effort. Our estates team have put their heart and soul into it.

BR. So, for the benefit of the readers, could you just explain what you have done at the school.

AF. Yes; we’re now a designated net zero-carbon school estate. That means that none of our transport, power or heat usage on the estate generates any greenhouse gas emissions.

BR. And how does that manifest itself in practice? How does it affect the mechanics of operating the school?

AF. Well let’s start with the power, because that’s arguably the easiest bit. We are still using power from the national grid, but a lot less of it than we used to because we generate so much of our own power on the estate, courtesy of the usual technology – solar PV; but we’ve also got a small hydro generating system using the brook. And we ensure that all the grid power we do procure is 100% renewably sourced. The transport is all zero-carbon too. EVs. And it’s all part of an integrated system. Our mini buses, for example, are plugged into the school power circuit when not in use and they’re either taking a charge from the circuit when there is spare capacity from the solar or during the night when the grid rates are incredibly cheap; or they’re acting in their role as mobile batteries and selling power back to the grid when the grid needs it. It’s all automated. It saves a lot of money.

BR. And I understand that all the heating comes out of the ground. Is that right?

AF. We converted all our heating to ground source heat pumps back in 2020 when the government was sponsoring it so generously, in our case to the tune of over £3M. That subsidy basically covered the cost of the system with some room to spare. The heat pumps extract heat from the ground, boost the operating temperature via some clever technology which is best described as the refrigeration cycle in reverse, and then pass the heat to the distribution systems in the buildings – mainly normal radiators actually. We’ll be making a net profit from the system just as soon as we’ve settled the bank loan in 3 years time. It’s amazing really to think that we’ll actually be making money from heating the school.

BR. Does that work? The technology I mean? I’ve got a neighbour who’s got one and he’s not happy.

AF. Well I won’t deny I was worried when we embarked on that project. But we visited several sites that had already been converted, to check it wasn’t a big white elephant. A clear pattern emerged: where the system had been carefully researched and specified, and obviously properly installed, then it worked as intended, even in listed buildings. But where it hadn’t been carefully specified it didn’t work so well.

BR. And I believe you’ve also had a big drive on enhancing the efficiency of the buildings in the past 5 years?

AF. Yes, that’s helped a lot, as you’d expect. Plus we’ve done the same with the occupants. Everybody is energy and waste conscious now and we run a continuous campaign in that respect.

BR. What gave you the idea to do all this? Did it come from you or were you directed to do it by the governors?

AF. It all started with a piece of chocolate, funnily enough. I’d done a fair amount of my own reading around the issue of climate change and sustainability before I joined the school, back in the spring term of 2020. I’d been determined to make a difference as soon as I arrived, but I’d pretty quickly realised that it would not be so easy. For one thing, I hadn’t realised how little spare time I’d have to achieve anything other than maintaining steady state operations. But there was also no real focus on sustainability in the school. So I was on the verge of putting it off for at least a year when a letter arrived with some chocolate in it. It explained in very plain terms that we had about a year to get our heating converted otherwise we’d miss out on the subsidy that was designed to make it all affordable. I took that to heart, discussed it with my chairman, John Reese-Noble, and we agreed we should find a way to get it done – if we could do it without wrecking anything else. The chocolate wielding company turned out to be very helpful in guiding us through the maze of technologies and installers and now it’s all done.

BR. What were the biggest hurdles?

AF. Lack of time to focus on it, probably, but I gradually learned to delegate as much as I could; and I insisted that we did not skimp on project management effort. So many pitfalls were avoided because I had a company that I trusted working alongside me. They were adept at pointing out in advance what could go wrong. They took on a lot of the intellectual and organisational effort, and anyway, my own team didn’t have any spare capacity, nor the specialist knowledge required. The other challenge was bringing the senior leadership team along in a timely manner. Just think: one moment the budget and plan for the next 5 years were pretty much settled; the next moment we decided we had to find space for a programme of work stretching into the £millions – although not as much as our new builds, I hasten to add. And it wasn’t exactly glamorous stuff on the face of it. Governing bodies and academic staff don’t normally get fired up by heating plant or solar farms. But I let John take the lead on the internal hearts and minds campaign and he was very good at it. His catch-phrase is that you catch more flies with honey than vinegar, and it’s true.

BR. And I suppose the changing mood amongst the public helped?

AF. Yes. 2020 was the year that the national mood seemed to change. Parents started asking us what we were doing about sustainability and this inevitably had an impact on the priority. It was our marketing team, actually, that were the keenest on it. It was their idea, for example, to plaster our green credentials all over the side of our minibuses. People notice when our minibuses turn up at fixtures, especially now that we’ve got the zero-carbon status in big bold letters on the sides.

BR. Were there times when you wanted to give up?

AF. 2020 was a tricky year, because we had to get the main heat project finished or we’d have lost out on the government money. I definitely put my own neck on the line there, but I’m so glad I did. I’d hate to be one of those schools that are having to do the conversion now as the Building Regs gradually tighten up and the subsidies have all but stopped. Basically it’s now stick instead of carrot and I know that some of my colleagues in other schools are finding it a struggle financially. The regs seem quite innocuous on the face of it, but when you suddenly discover that you can’t replace a system in the older buildings with the same technology as you had before, it turns what was an affordable routine job into a serious cash headache. And let’s face it, nobody is going to have much sympathy for a struggling school in the independent sector these days.

BR. What would your advice to other bursars be?

AF. Three things. Thing One: have the courage of your own convictions and if you can see that something needs to be done but it’s not the flavour of the month amongst the school leadership, keep plugging away. People will come round in the end, provided that you are diligent about the business case, especially once you’ve got an ally or two in the right places. Thing two: make sure you follow a methodical step-by-step risk reduction process for each project. If you don’t do that, things are more likely to go wrong. Thing Three: you get what you pay for. If I’d tried to do all this on my own, it would never have worked. It was well worth having the additional support.

AF. Don’t ignore the chocolate. You never know where it may lead you. 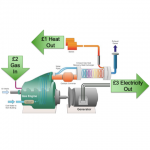 What Is a Combined Heat and Power System?News