PS. Prime Minister, the children are going on strike.

PM. Which ones? Labour or our lot?

PS. No, no Prime Minister, the school children. They’re going on strike.

PM. Oh for goodness sake! Isn’t there already enough to be worrying about? What are they going on strike for?

PS. They’re having a day of strike action in protest at the lack of action on climate change.

PM. Are they allowed to do that?

PM. What do you suggest?

PS. I think it’s a one-liner from you to point out that the best way to prepare for the future is to study hard, and then send in Perry with a statement about how the UK is leading the world on intent and action.

PM. How can we be leading a lack of action? Isn’t that an oxymoron?

PS. Well strictly speaking it is Prime Minister. But to be fair, there is mileage in being seen to be doing not enough less slowly than everyone else. At the same time we could leak the latest overspend on the carrier budget to the Mail as a diversion and…

PM. Is there an overspend on the carrier budget?

PS. Well strictly speaking no Prime Minister. The ships are on budget, after strippages and adjustment by the Treasury. But there is a lack of provision for any aircraft.

PS. Well it’s not that serious Prime Minister. We can get some on eBay I’m sure.

PM. Isn’t it the case that sea levels are going to rise as a result of climate change?

PM. This is more serious than I thought. How about this? Transfer the budget for the carriers from the MOD to BEIS and re-role them as climate change relief ships. That way they could operate usefully all around the world and won’t need any fast jets. And it would teach young Williamson a lesson for being so lippy with the Chinese. 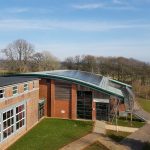 Completion of 50kW Solar PV array at Ditcham Park in time for the FiT application.News 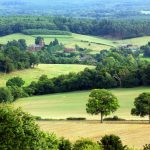