Climate Change: Why Schools and Academies Need to Get on the Front Foot

Walk with me a moment, Dear Reader, and I’ll share a useful nugget or two about how to approach the climate change issue in your school, college, or trust.

Foraging around the media recently I found some useful snippets. The first is a note from our own Public Accounts Committee in parliament. For context, remember that in June 2019 the government committed in law to achieving ‘net zero’ greenhouse gas emissions by 2050, to deliver on the commitments it made in signing the Paris Agreement in 2016. So, the PAC has a legitimate interest in gauging our national progress towards that goal. On 5th March this year it published the findings of its recent review. Obviously the government is in for a bashing in any PAC review and we have to recognise, Dear Reader, that people can be trying their very best and still not get it all right, so I am not publishing this to knock the government.

The key extracts from the PAC report are:

‘As much as 62% of the future reduction in emissions will rely on individual choices and behaviours, from day-to-day lifestyle choices to one-off purchases such as replacing boilers that use fossil fuels or buying an electric vehicle.’

‘There is a disconnect between people’s concern about climate change and their understanding of what is required to achieve emissions reductions in the UK.’

I recognise that issue. It’s my job to brief school governors and senior managers about the art of the possible on their school estates. A regular initial exchange goes a bit like this:

“I’m keen to make the school more sustainable. What do we need to do?”

“There is a wide range of things but the things that really make the difference are expensive.”

“The most challenging task is to decarbonise the estate. That means that your use of power, heat and transport on the estate no longer generates any greenhouse gas emissions. To achieve that on this estate would cost about {insert any amount from £150,000 to £15M, all depending on the size of the school estate}.”

“OK, can we talk about the bits that don’t cost quite as much as that?”

Setting aside my desire to evoke the drama of the encounter, there is a serious issue here: school leaders are increasingly concerned about climate change but for the most part they have no grasp of the extent of the challenge. And why would they have? Until now, the way in which a school sources and uses its energy has not been a strategic issue: but all of a sudden it is. Coming hard on the heels of Covid-19, and alongside other lesser but still significant challenges like – well, just running a school on a tight budget in normal times – schools are also now going to have to make a significant adjustment because of climate change; and the scale of this task is only just starting to sink in, I believe.

In another recent snippet, Joss Garman, the European Climate Foundation’s director responsible for overseeing the Foundation’s strategy and grant-making in the United Kingdom has noted:

‘Climate action in Britain is moving into more politically fraught terrain because the next phase of carbon cuts involves front of house decisions about how we heat our home and what kind of car we drive. And these bring with them tricky questions about individual freedoms, who pays for these changes and who benefits.’

In other words, although we’ve achieved a fair bit as a nation already, so far it’s been the easy bits: the public’s real appetite for action has not been well tested. Now it’s going to have to be tested.

This begs the question: if it’s all going to be so expensive – and yet it must be done – who is going to pay for it? That question obviously applies on the domestic front and must be a cause of consternation for any governing party in a democracy; but it also applies to public sector organisations like schools and colleges. I believe it is set to become a major concern for every school governing body in the country.

The news for school budgets is mixed. In short, money is available but it’s still proving hard to secure it. Here’s a summary:

Over the past 10 to 15 years various financial incentives have been introduced to encourage decarbonisation, by the UK government and – to a lesser extent – from other sources. The two largest schemes have been based on subsidies, which enable capital outlay to be recouped after the work has been done: the Feed-in-Tariff (FiT) for power-generating installations; and the Renewable Heat Incentive (RHI) for renewable heat installations.  However, the FiT closed for new applications in 2019 and the RHI closed for new applications on 31st March this year, (although there has been some scope for heat projects to secure extensions for completion until 31st March 2022).

For the public sector, the problem with the subsidy approach is that there is still the requirement to find the initial capital outlay. In contrast, grants and interest-free loans – mainly available from Salix Finance – avoid this need. But until recently it has proved difficult to configure Salix financing in a way that suits the greatest challenge of them all, which is the decarbonisation of heat on school estates. And school leaders will know that competition for Salix financing has always been fierce, for every category of project.

Things may be starting to change, although it’s still too soon to tell by how much. In September last year the UK Government introduced the Public Sector Decarbonisation Scheme (PSDS), with an initial budget of £1Bn, to be administered by Salix. This was partly an initiative to generate work again, as part of the post-Covid recovery, which is no doubt what led to the government stipulation that the money was to be allocated and spent by no later than 30th September 2021, and ideally by 31st March 2021. At the time of writing, £932M of that first £1Bn had been allocated to public sector bodies, including schools and colleges. More recently, PSDS2 has been launched, with another £75M being released as a top-up for 2021/22. PSDS2 opened for bids at 2pm on 1st April this year. Within a week the scheme had been over-subscribed.

Some themes are emerging, for schools and colleges:

So what to do? I would offer these suggestions:

ReEnergise Supports the Pump it Up Campaign for Heat PumpsBlogs, News 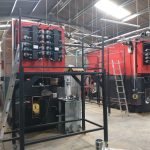